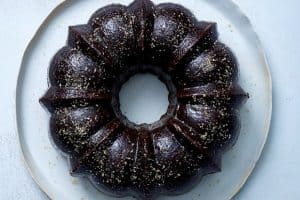 A few years ago, J and I went to dinner at a little place in the Berkshires. We had decent salad and entrees that were meh. But, since we had eaten said salad and fish (so healthy, right?), we decided to order one dessert to split between us. A lover of all things British, I voted for the sticky toffee pudding that I had read about in many English novels. It came in a little ramekin and was so delicious that we could have eaten another three of four of them. Each. No kidding. It was that good.

Flash forward about ten years and we are in Charlottetown, Prince Edward Island, sitting at the bar in The Merchantman restaurant. J had a great fish dinner and I had a scrumptious seared tuna salad. That, of course, meant that we were entitled to have dessert (salad and fish: so healthy, right?). We chose The Merchantman’s version of the same decadent dessert. It was fabulous.

“You should try to make this at home,” said J.

So when our good friends Elena and Steven came for dinner, I did. The particular recipe I chose uses not the customary ramekins, but a bundt pan. Much easier, I thought. And it’s true; it’s not a difficult recipe to make, but it does require lots of steps, several pots, and much patience. BTW, nowhere in the name is there a clue that this dessert is based on dates.

The cake soaked up a lot of the toffee syrup through holes poked in both top and bottom, and was served with even more poured over the top. With a sprinkle of turbinado sugar over it and a dollop of whipped cream, it looked gorgeous. (Bundt pans do make every cake look better.)

It was spectacular. So good, in fact, that when I brought a few slices to share with my writing group, my normally generous-to-a-fault J was a bit put out.

Given that this dessert is made with lots of butter, heavy cream, and dark brown sugar, I would recommend eating nothing but salad in the days preceding a sticky toffee indulgence. Or perhaps, a full-on fast.

Then again, dates are fruit. Right? Must be healthy.

Here is a link to the recipe I used, The only change I made was to puree the date/water mixture in my Ninja rather than simply mash with a fork.