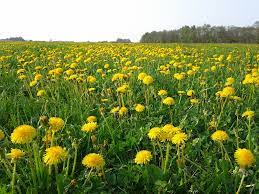 This month we have a special treat in the night sky. On Sunday the 28th we’ll see the Super Worm Moon! The usual Worm Moon of March is this year also a super moon. That means it is the closest it will come to the Earth in its elliptical orbit, making it seem even larger and brighter than usual.

It’s also the first full Moon to occur after the spring equinox on March 20, so it determines the dates of two big holidays: Passover and Easter. Passover begins on the night of the full moon after the northern spring equinox. And Easter will be celebrated on April 4, one week after what Christians call the Paschal Full Moon.

I’m currently in the midst of cleaning for Passover and, while dusting off my cookbook shelves, I found a gift from my mother-in-law, a Julia Child cookbook inscribed to me. That started me thinking of the movie Julie and Julia, which then got me thinking that it’s time to start a new project. Because I’m often asked to review cookbooks, I have a LOT of them, but so many others that go untouched from year to year. So, I’m going to try to make one recipe picked at random from each book over the next several months. Let’s see how that goes. There’s quite a selection: Chinese, Spanish,Italian, Asian, African, Israeli, Persian, Lebanese, Syrian …

I love my garden, especially the section of it that produces edibles. But, as much as I love to get down into the soil (and that includes weeding) and as much success I’ve had with certain things — Ichiban eggplants, cherry tomatoes and, of course, the ubiquitous zucchini — there are a few veggies that just do not cooperate. To wit: bell peppers. While I can get enough jalapeños and poblanos to fill gallon freezer bags, their sweeter cousins turn out bitter with thin skins. Perhaps it’s just a matter of the growing season in New England being too short. But if so, why sell the sets here at all? If nurseries intend for gardeners to keep them indoors for a month or two prior to planting, then they should sell them in March, right?

At any rate, I decided to take my failure as a challenge rather than as a defeat. I really wanted to grow some sweet bell peppers, so I did an experiment. I took the seeds from a particularly delicious grocery-bought pepper last May and planted them in a pot. During the summer the pot sat outside on the patio, but once fall came I took it inside and settled it in with other plants in the sunroom.

After a few months I separated the strongest seedlings and placed the three resulting pots in the southeast corner of the room in order to ensure that they would get maximum sunlight. I watered them and fed them.  I did not sing to them. Perhaps that was my mistake. But don’t forget, they had flora friends to keep them company.

We are now nearing the end of February and a miracle has occurred: minuscule peppers are popping up on all three plants. You may need a magnifying glass to see them in the photo. But they’re there!

Short growing season indeed. At this rate the peppers should be ready to eat by 2025.

Pandemic cooking has merged with the research for my food history/cookbook, so I’ve been testing dozens and dozens of new recipes, tweaking and fine-tuning to make them the best they can be. Because, after all, every cook has her/his own special twist secret makes a dish special.

With bated breath I awaited the fall crop of pomegranates. My study of the fruit’s history and travels was complete, but recipes needed testing. Late fall they finally arrived, and as soon as they did, I bought a bunch and plunged into recipes for the chapter on this amazing fruit with the tart-sweet, ruby-red arils.

Only one recipe, stemming from the Golden Age of Spain, did I have to exclude completely. Although I loved the idea of featuring this historical dish for chickpeas and honey with, and as hard as I tried to get J to enjoy the “different” flavors of said dish, I knew in my heart that he was right. People don’t want food that tastes bad, so why include a recipe for it? So, as much as I hate to waste food, I couldn’t bring myself to eat the leftovers for lunch the next day. Down the disposal they went.

But the rest! Oh, my. All came from Asia, the fruit’s birthplace, and some were out of this world. Persian kufteh-ye pesteh-o Anar and Indian chicken chitarnee were so delicious that they have earned a permanent place in my repertoire.

I realize that I have the best job in the world. I get to prepare, taste-test, and then share delicious meals with the people I most love in the world. And then I get to offer those recipes to everybody who wants them. 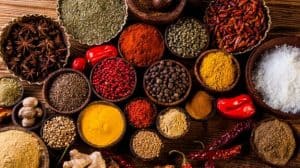 While I’ve been managing pretty well during the quarantine necessitated by the ongoing COVID-19 pandemic, there are a few things I really miss. Above all, I miss hugging and kissing my kids and their kids. I am truly hoping to be able to put a smooch on 9-year-old Max’s soft cheeks before he starts to shave.

I miss shopping. Yes, just about everything is available for curbside or home delivery, but I like to examine things before I buy. I like to browse. I like to try on.

And, as much as I love to cook, I do miss eating out, especially with friends. And what I miss most of all is Indian food. But, now that we’re nine months into the pandemic, I’ve decided to take the plunge and try out some recipes.

Why I’ve been so intimidated by cooking Indian in the past is a puzzler. Maybe it was the list of ingredients that I don’t have? Like dried mango powder, fenugreek, and tamarind paste. But I do have cumin and turmeric and cardamom. I even have garam masala. So what was I worried about?

Since I’ve been working on an article about India, my cravings have intensified. And my need for a recipe to include in the column became evident. Luckily, I just happened to have all the ingredients in the house for Chicken Chitarnee, a curry popular among the Jews of India.

But once I got started, there was no stopping. Even as we were still working our way through the chicken (I made a whole bird), I had to have Chana Masala. And Naan. And shall we try Ghee Rice? And rice pudding? And …

As of yesterday, I think I’ve had enough to satisfy my cravings for Indian food. For now.

Last night we had scrambled eggs for supper.