Who’s that howling in the night?
Each January it’s quite a fright.
Some packs of wolves, they bay in tune,
To honor what we call Wolf Moon.
The second full moon of winter, the Wolf Moon, comes tonight, January 17th! But why do we call it the Wolf Moon? The story is that wolves howl at the full moon. But guess what: they aren’t really howling at the moon. That’s just a myth. They’re actually talking to each other! What do you think could they be saying?
Maybe “Come on over. We’re having a party!
OR
“I just found us some supper. Be here at 6 o’clock!” 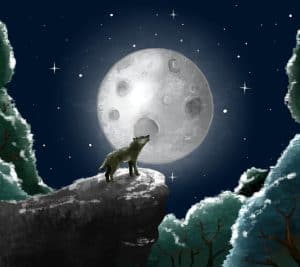