Pull out your binoculars and look to the sky tomorrow evening, March 6th. Uranus will appear to the west of the moon! But don’t dawdle! Do it before the two disappear from sight at around 10. 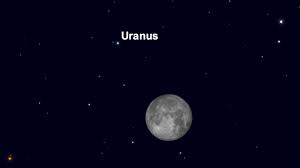 February Full Moon
When February rolls around,
It’s cold and icy on the ground.
Up in the sky a circle glows,
The Snow Moon shines while strong wind blows.

This month’s full moon will make its appearance this Wednesday, February 16th, a little before midnight Eastern time, and it will appear full for about three days from about 12 a.m. Tuesday to around midnight on Thursday.

While you’re looking up, make sure to make note of that bright star shining right near the moon. It’s Regulus, the brightest star in the constellation Leo, and among the brightest in our night sky.

Why Won’t My Key Lime Tree Produce Fruit?
I have two trees in my sunroom (formerly outdoors until they became too big to move). One gives me a good crop of about a dozen limes, one has stopped producing. What should I do?
https://www.gardeningknowhow.com/edible/fruits/lime/reasons-and-fixes-for-lime-tree-not-producing-blossoms-or-fruit.htm

WHAT CAUSES LOTS OF FLOWERS BUT NO TOMATOES
http://bit.ly/1I57Yzr
From gardeningknokwhow.com

IT’S ALL ORGANIC, BUT NOT NECESSARILY ALL GOOD
http://www.leereich.com/2014/12/its-all-organic-but-not-necessarily-all-good.html
By Lee Reich

CONFUSED ABOUT GMOs?
So was I, so I found this article that lists pros and cons.
http://www.webmd.com/food-recipes/features/truth-about-gmos