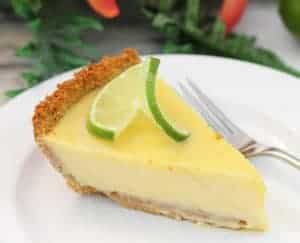 I’ve never been to the Florida Keys, but my family and I have loved key lime pie since the first time we tasted it, and we can certainly understand why it is the official pie of the state of Florida. So, one day I decided that it would be fun to try to make one. But, in what can only be described as a temporary break from reality, I decided to grow my own key limes. What began as two little saplings have grown tall in my sunroom, and every year they produce a crop of about a dozen limes each. And every year I harvest the fruits, squeeze them, and freeze the resulting juice.

For those readers who aren’t aware, key limes are tiny. Each one produces about a half teaspoon of juice. So it will come as no surprise that it has taken four years to get enough juice to make a pie. Two pies, actually, because by this time my family has grown to include our three kids, their spouses, and six grandchildren. And my rule was that all would have to be present in order to partake of this legendary dessert.

This past Sunday was the big day, as all fourteen of us were together at son Seth’s house (although little Tali isn’t on solid food yet, so I gave her a pass).

The pie recipe itself was actually quite easy, with only four ingredients, plus the three for the graham cracker crust.

But I was nervous. After all, I’d never prepared any recipe for key lime pie before. What if the one I’d chosen wasn’t good? Would I have to wait another four years before making it again?

To add to my angst, it turns out that the recipe I had was not the traditional one calling for raw egg yolks. In that original recipe, the protein of the egg yolks and condensed milk react chemically with the acid of the lime juice. This reaction causes the filling to thicken on its own without requiring baking. Today, because consuming raw eggs can be dangerous, the pie is usually baked, even if only for a short time.

Would my recipe, made with sweetened condensed milk, sour cream, key lime juice, and zest — but no eggs — make for a runny pie?

As if all that wasn’t enough to worry about: I can’t make a pie crust to save my life, so I no longer have pie pans in the house. Luckily, a quiche pan that must have been a wedding gift was tucked away in a cabinet. That, and a round cake pan of the same diameter, did the trick.

It turns out that graham cracker crusts are super easy to make.  (I may make more pie!)

The verdict: the pie was delicious and not at all runny. And, although my friend Sue insists that the whipped cream garnish is mandatory, I inadvertently left the cream in the fridge at home. Just as well. The pie was so rich that nothing else was needed.