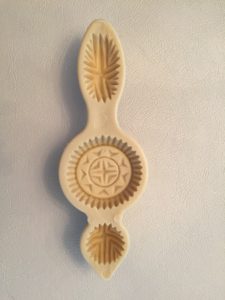 So, it’s time to pull on the elastic waistband slacks again because I’m reviewing another cookbook. This one is called Fress, a collection of Middle Eastern and Eastern European recipes gathered from author Emily Spitzer’s extended family members.

The woman loves her exotic flavorings, and I’ve been buying so many little jars and bags that my cabinets are overflowing. Baharat, nigella seeds, pomegranate molasses …

One of the spices Spitzer calls for is mahlab powder. I had never before heard of the spice, so I went straight to my friend Google, where I learned that mahlab powder is processed from the seed inside the pit of a St. Lucie cherry, and provides a flavor that is a cross between bitter almond and cherry. The spice has been used in Middle Eastern and Mediterranean sweets for eons. (How did anybody ever think to look inside the cherry pit? Were people in ancient Mesopotamia just sitting around the campfire one night spitting out cherry pits when one bored Sumerian decided to crack one open with a rock?)

Anyway, in the dessert section of the book was a recipe for ma’amoul cookies that called for mahlab powder. Again, I was off to Google, where I learned something that brought me back in time and solved a mystery. Back in 2004, our daughter Elana spent a semester at the University of Haifa, studying Hebrew and Arabic. Naturally, we went over to visit and followed her around to places she loved to frequent. One of these places was the Druze village Daliat el-Carmel, where she had heard that a particular type of tea she favored was sold.

Elana approached the proprietor of one particular shop and asked, in Arabic, if he in fact stocked the sought-for item. He did indeed, and the young man and his father were so taken with her that they refused to accept payment for said tea. (The father also tried to marry her off to the son, but that’s beside the point of this tale.)

This generous gesture meant, of course, that I felt obligated to purchase something. Which I did. Unfortunately, I had no idea what it was I had bought until this week. It looked like a mold of some sort, but for what purpose I hadn’t a clue.

It turns out that the little mold I had bought was a ma’amoul mold, used for making ma’amoul cookies! Mine has four separate deep indentations with four distinct designs in four different sizes (see photos). It is used for making a very buttery sandwich cookie, this particular recipe calling for a spicy date and nut filling. 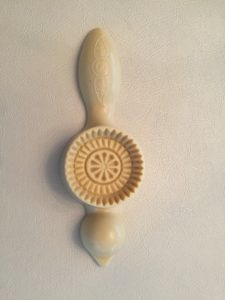 The cookies are delicious. It’s only too bad that the confectioner’s sugar used to dust their tops completely covers the beautiful designs.

If you liked this blog post, please share it with your friends. Even better, ask them to sign up to receive more. I promise not to overwhelm.